Equity markets enjoyed strong gains during the third quarter, but October proved much more challenging. We believe the recent weakness and market volatility can be attributed to two key factors: the rise in interest rates and growing trade tensions between the United States and China—both of which are likely to adversely affect margins and cash flow over coming quarters.

Recent events have thrust these two factors back onto the front burner, and we expect them to remain there for some time. However, investors shouldn’t be overly surprised, as neither headwind is particularly new or unforeseen.

On September 26, the U.S. Federal Reserve (Fed) lifted rates for the eighth time in the current rate-hike cycle, with Chairman Jerome Powell removing “accommodative” from his description of Fed policy and emphasizing his resolve to maintain the current pace of monetary tightening—roughly one hike per quarter.1

The Fed also continued on its path of quantitative tightening (QT)—monetary policies designed to keep inflation in check through the withdrawal of economic stimulus—with its System Open Market Account holdings falling below the $4 trillion mark for the first time since early 2014.2 The Fed has recently been selling off Treasury holdings at the same time that the ballooning budget deficit has forced the government to dramatically increase the size of its Treasury auctions. Faced with this calamitous triple whammy, it’s hard to see how bond yields wouldn’t trend higher over coming quarters.

Rising bond yields aren’t necessarily a problem for equity markets if they simply reflect improved U.S. growth prospects; however, the story isn’t anywhere near that simple. Over the first 10 months of 2018, the 10-year U.S. Treasury bond yield rose by about 75 basis points (bps)—or 75 hundredths of a percentage point—with roughly 15bps of this increase representing higher break-even inflation. This implies that the real yield has risen by 60bps, which, in turn, can be broken down into two components: growth and the term premium—the potential of receiving an additional rate of return for the added risk of holding an investment over the long term. Our analysis suggests that each component accounts for about half of the rise in real yields.

Understanding what’s driving yields higher is important because interest rates can rise for “good” reasons—specifically growth, which is constructive for equities—or for “bad” reasons—such as inflation and the term premium, both of which are negative for stocks. We believe that most of this year’s move in yields reflects the latter, constituting a considerable headwind for equity markets.

Moreover, looking ahead to 2019, we believe that U.S. growth has likely peaked for this cycle, so that factor is unlikely to drive bond yields much higher during coming quarters. However, inflation could increase moderately from today’s level—although by much less than in previous cycles, largely due to the impact of technology. Most important, the term premium has been artificially suppressed by quantitative easing (QE)—monetary policies designed to stimulate growth—and could rise significantly higher with QT. To be more specific, the term premium is currently –30bps, well below its post-2000 mean of 100bps, suggesting considerable upside risk for this key driver of bond yields.

The impact of the growing U.S. deficit

When assessing the risk of significantly higher bond yields, it’s also important to consider the U.S. fiscal situation, which is already deeply imbalanced and, unfortunately, deteriorating rapidly. At about $1 trillion, the 2019 deficit will be the highest ever as a percentage of GDP, excluding periods of war or recession.3 Moreover, the Congressional Budget Office forecasts the deficit will march past the $1.5 trillion mark in 2028 and the mind-boggling $6 trillion threshold by 2048. Such unprecedented deficits do need to be financed, which necessitates larger and larger Treasury auctions, placing further upward pressure on interest rates. 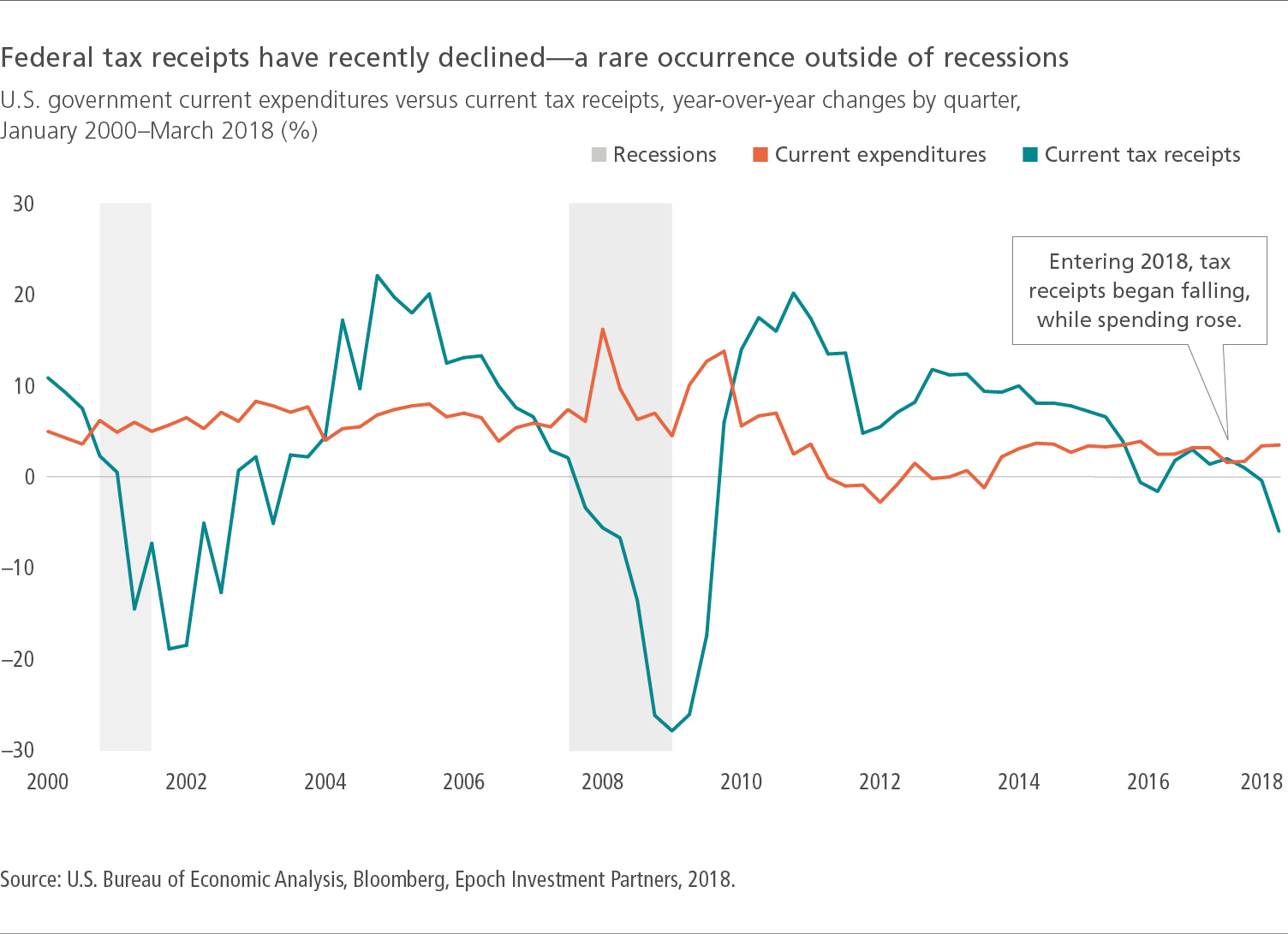 Our analysis suggests we’ve not yet reached dangerous levels for bond yields; however, as we saw during the first two weeks of October, sharp sell-offs in bonds often bring wider market volatility. If the market-clearing interest rate ends up being 4%—comprising 2% inflation and a 2% real yield—it’s probably something that capital markets can handle. Yields significantly higher than that, though, could cause problems, possibly beginning in the second half of 2019. The speed of the increase in bond yields is also crucial. When rates rise too quickly, they weigh more heavily on growth expectations and valuations for risky assets, especially long-duration equities.

Bringing the supply chain back home

The second headwind for equity markets has been the pugnacious protectionist policies pursued by the Trump administration. Although this has been a market concern for over two years now, tensions between the United States and China heated up dramatically entering the fall. For example, on September 18, the United States finalized tariffs on $200 billion of Chinese imports; Beijing immediately retaliated by slapping 10% duties on $60 billion of American imports.4 The following week, President Donald Trump accused China of trying to influence midterm elections, raising the possibility that he’ll impose further sanctions on China (as he had previously done to Russia).5 In an October 4 speech, Vice President Michael Pence alleged that “Chinese security agencies have masterminded the wholesale theft of American technology,” and that “Beijing is also using its power like never before.”6

This unwelcome trend is important because it’s likely to unwind decades of progress. Global trade accelerated from 1989 with the fall of the Berlin Wall and was then turbocharged at the turn of the century when China entered the World Trade Organization. Complex global supply chains were put in place, which helped drive a dramatic increase in manufacturing margins.7 The lamentable turn toward protectionism is likely to be particularly negative for sectors such as technology hardware, semiconductors, industrial capital goods, and some consumer cyclicals. 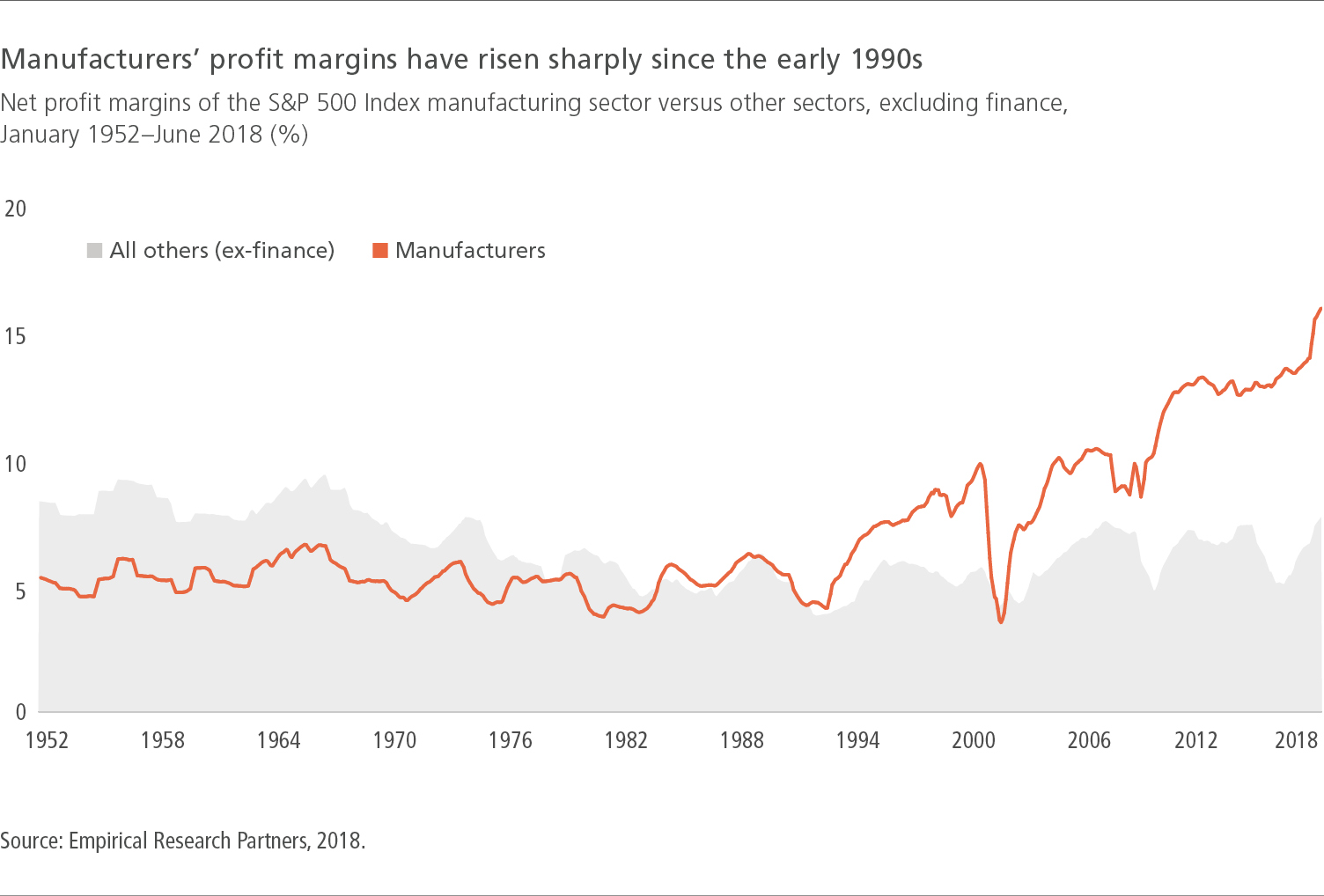 Manufacturing margins may come under pressure in 2019

The secular decline in interest rates and the labor cost savings from locating production abroad (largely in China) are estimated to have accounted for about half of the increase in manufacturing margins since 2000.8 However, both factors are likely fully played out—at least for the next couple of years—and will probably be at least partially reversed, in our view. As discussed, we do expect interest rates to increase moderately through 2019 and 2020, and rising U.S.-China tensions will probably lead to a bit less offshoring (although talk of a resultant manufacturing renaissance in America strikes us as somewhat delusional).

Moreover, some experts have posited the idea of a bifurcation of the electronics supply chain, along with other parts of the information technology industry, such as the infrastructure for mobile networks. We fear this would result in a much less efficient global supply chain, causing significant damage to margins.

Regarding the other factors that have driven manufacturing margins higher, prospects are mixed. A further decline in effective tax rates is unlikely for the foreseeable future, in our view. As for productivity gains resulting from more efficient domestic plants, this trend should continue, providing a mild tailwind for margins. On balance, though, this analysis makes a convincing argument that the peak in manufacturing margins is now well behind us.