Volatile moves in asset prices in recent days have left investors running for cover and searching for explanations. Does this sell-off represent the start of a major bear market? A deeper examination of the economic data may offer some clues to the answer.

It's the economy, stupid

This catchphrase may sound familiar to readers old enough to recall Bill Clinton’s 1992 campaign to unseat President George H.W. Bush amid the then-prevailing U.S. recession. More recently, the volatile movements we’ve seen in equity and government bond prices have been both aggressive and surprising. Everyone is searching for explanations, and a number of investors have suggested we’ve finally left an extended economic era of lower-for-longer growth, inflation, and interest rates for good.

It’s natural to think this time is different, but the recent market action hasn’t changed our long-standing macro perspective: We don’t see signs of a major shift away from the low economic growth, low inflation, and low interest rates that have persisted since the 2008 global financial crisis. Rather, we’ve observed three potential catalysts that may help explain what’s happened in the market recently.

1. Fears that inflation is coming

This view isn’t totally out of left field, but we don’t subscribe to it. The argument goes that inflation is accelerating, so the U.S. Federal Reserve (Fed) will have to hike interest rates more aggressively as a result. Those who think we’re facing a late-cycle surge in inflation would likely cite higher commodity prices, an expected fiscal stimulus from the Tax Cuts and Jobs Act, and the recent U.S. wage growth data as evidence that we’re on the precipice of stronger realized inflation rates. While we expect the tax cuts will be positive for both equity and fixed-income markets, we don’t think they’ll provide much of a boost to economic growth or inflation. As for the improved earnings growth numbers, they don’t look quite as good when you dig into the details. For starters, the number of hours worked fell, goosing up the growth in average hourly earnings. Moreover, the wage growth wasn’t broadly based; supervisors—accounting for only about a fifth of the workforce—got the lion’s share of the wage growth. Finally, there were minimum wage hikes in a number of states in January, which may have fostered some perceived lift to the fundamental figures. 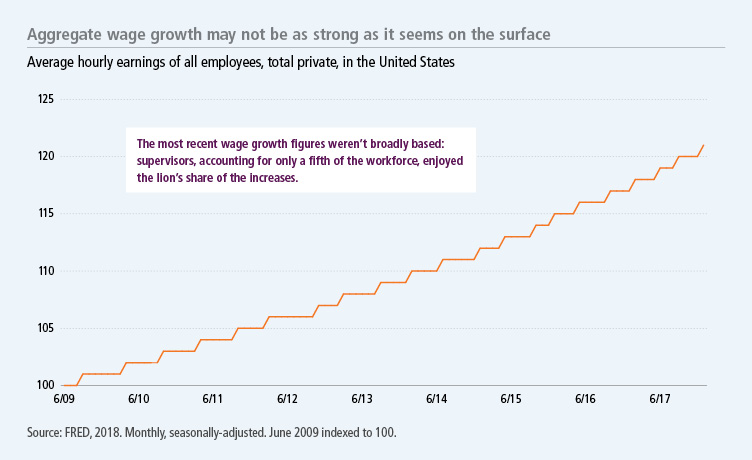 Fears of a spike in inflation are overdone, in our view. If anything, relative to consensus, we’re making greater note of some disinflationary pressures in the economy. For some time, we’ve been emphasizing the threats to global growth drivers—unfavorable demographics, a globalized workforce—on inflation. Status quo disruptors, such as the gig economy and new technological innovations, also weigh on inflation. In addition, we’ve had positive supply shocks, such as tax cuts and deregulation. We’ve also seen a negative demand shock, as monetary accommodation has been withdrawn, and this will only grow in scope as the Fed rolls more assets off its balance sheet and as other central banks globally begin to withdraw monetary stimulus. These shocks are all disinflationary. While we do expect prices to continue to creep up slowly in 2018, we don’t think a late-cycle surge in inflation is in the cards.

The rise in U.S. Treasury yields and the pullback in equity prices could instead reflect greater uncertainty globally. One related driver might be attributed to a massive shake-up in the roster of central banks driving monetary policy around the world. The European Central Bank (ECB), the Bank of Japan (BoJ), and the People’s Bank of China (PBoC) may all have new policymakers at the helm a year from now. In addition to new Fed Chair Jerome Powell, the Fed will also have a new vice chair and a new regional president in New York—both posts among the most critical in the institution—in the next year. Across the Atlantic, the ECB must fill not only its president’s chair, but also three other seats in the next two years. In Japan, BoJ Governor Haruhiko Kuroda’s term ends on April 8, and we expect him to be reappointed, but it’s not a foregone conclusion. Turning to China, PBoC Chief Zhou Xiaochuan is expected to step down in the next few weeks.

Collectively, these central bankers were architects of the incredibly easy monetary policy environment in which we’ve operated throughout this entire post-2008 business cycle to date. Their successors may not pursue the same policies. In particular, the Fed may look different under Chair Powell’s stewardship than it did under that of Chairs Bernanke and Yellen. We don’t know how Mr. Powell would respond to a spike in inflation, a market meltdown, or a dip into economic recession; he was reluctant about the third round of quantitative easing, which suggests he may be warier of asset price bubbles than his predecessors were.

The Fed could potentially dampen the effectiveness of the executive branch's pro-growth policies—deregulation and tax reform, for example—if it were to adopt a more hawkish tone. It would be difficult to imagine that the White House wouldn't have an opinion on such a development, if it were to transpire.

Regardless, we believe the market pullback that we’ve seen so far is insufficient to trigger any kind of reaction from the Fed. We continue to expect the Fed to raise interest rates in March, following up with an additional two hikes before 2018 draws to a close.

3. Fears that downside risk isn't dead after all

The strength of the correlation between equity prices and central bank liquidity has weakened recently, as has the correlation between equity prices and corporate earnings. These softening relationships suggest that sentiment has been supporting stocks more than anything else. With so much complacency among investors, downside protection had been vastly diminished until the unexpected jobs data triggered a round of panic selling, which was uncharacteristically absent throughout all of calendar year 2017.

In addition, a number of algorithms programmed to sell off assets are likely to have sparked an increase in market volatility. The role that automated trading could have played in the last few days is encapsulated in a recent tweet that suggests banks of computer hard drives have replaced traders.

When asset prices become volatile, these algorithms ratchet back their equity exposure, frequently pouring fuel on the fires of market corrections. Certain strategies, such as risk-parity and managed volatility strategies, have allocations that are tied to volatility as well and so also may serve this function.

Where do we go from here?

Our fundamental view remains the same: We're likely stuck with U.S. economic growth only moderately above its potential GDP, and the Fed's preferred definition of inflation—core personal consumption expenditure—will probably sit stubbornly below the Fed's 2% target rate for some time to come. While we don’t see red lights flashing that the economy is overheating, we don’t believe it’s a weak growth story either. We haven’t incorporated an economic recession into our five-year forecast, but the risk of recession has gone up since the 2018 FOMC seems much more hawkish than in 2017.

The pullback we’ve seen in equities has been caused in part by higher bond yields. Some investors expect yields to blow through the 3% mark and rise to 4%—or even 5%. We’re highly skeptical of such a view. Historically, the risk premium that 10-year U.S. Treasury note holders demand over inflation has tended to sit near the average of that over the previous cycle—roughly 1% in this case. If we expect headline inflation of about 2%, and a risk premium of approximately 1%, the 10-year yield might rise to about 3% over the intermediate term, but a sudden spike greater than that remains unlikely, in our view.

While central banks globally will be pumping out less macro liquidity to flow into the U.S. Treasury market, the Fed’s measured pace of balance sheet unwinding should put an upper limit on longer-term interest rates in the United States. The Fed’s quantitative easing measures corresponded to a huge increase in bank reserves, which should only be partly reversed as the central bank continues to shrink its balance sheet. Since Treasuries have a zero-risk weighting, U.S. banks will have an incentive to replace those deposits with government bonds to please the regulators. This demand for Treasuries could push yields down.

In our view, this sell-off is unlikely to represent the start of a major bear market; instead, it should serve to clear out some of the froth and leverage that had been built up in stock prices. While they're scary and painful, these market moves may help prevent even larger corrections in the future.