The dramatic collapse of the Turkish lira has awakened investors from the dog days of August complacency. Analysts have been warning about macroeconomic imbalances in Turkey for years, but after the recent sell-off, investors are now wondering whether the collapse in the lira is down to Turkey-specific issues or if Turkey is a canary in the coal mine. The answer is both—Turkey is idiosyncratic but also a symptom of larger issues that could hit emerging-market (EM) countries more broadly as they deteriorate.

If analysts have been warning about Turkey for years, why did the wheels finally fall off the cart now? The immediate trigger was President Trump’s threat of sanctions against Turkey for the country’s refusal to release an American pastor from custody. The underlying causes include the government running the economy as hot as possible in the run-up to the June 2018 general elections, a reliance on foreign capital to finance domestic infrastructure projects, a significant amount of borrowing in U.S. dollar-denominated debt and an appreciation of the U.S. dollar (USD), a high current account deficit (estimated to be above 6% of GDP in 2018) and external debt burden, strong man President Erdogan with unorthodox economic policies (particularly his opposition to higher interest rates), a central bank that seems to lack independence, and the weakening of some of Turkey’s other government institutions (as evidenced by the appointment of Erdogan’s son-in-law as finance minister).

What’s ahead for Turkey?

After its initial collapse, the Turkish lira has enjoyed a small relief rally. We expect this to be short-lived, however. Here are some steps that the Turkish government could take to ameliorate the situation, all of them difficult:

Given that these options are all problematic, and the Turkish situation is likely to get worse before it gets better, does Turkey portend greater trouble beyond its borders? Even though many of the causes of the Turkish crisis are idiosyncratic, it seems likely there could be wider implications in three different ways.

First, there’s potential direct contagion from the Turkish crisis to the eurozone. BBVA, UniCredit, and BNP Paribas have the largest exposure to Turkish debt, and so a default on Turkish debt could cause some trouble for these banks: Share prices for several large eurozone banks fell by 5% to 10% over the past week as a result. Even if some eurozone banks couldn’t absorb the losses from their exposure to Turkey, this would likely be a supervision issue rather than a monetary policy concern for the ECB, which could change if contagion to other risk assets in Europe were to lead to a significant tightening in financial conditions in the eurozone. In that case, the ECB might have to back off of its plans to begin normalizing monetary policy at the end of this year.

Another risk for Europe lies in the deal between Turkey and the EU on migration, which has always been fraught with issues. So far, Turkey has held up its end of the bargain on the deal, but it could try to force the EU into offering funding in exchange for Turkey’s continued compliance. If Turkey were to allow refugees to flow into the EU once again, it would be particularly problematic for Germany’s chancellor, Angela Merkel. The governing CDU’s sister party, the CSU, faces an election in Bavaria in October and has adopted such a hard line on migration that it nearly caused the German government to collapse earlier this summer. It would be difficult for Chancellor Merkel to allow Turkey to abandon the refugee deal against this backdrop. 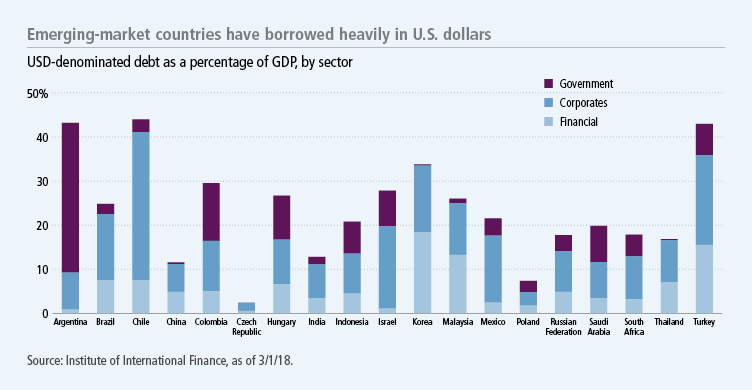 Second—and much more worrisome—the Turkish crisis may be a symptom of pain to come across the EM space. One reason is that Turkey, like many EM countries, has loaded up on USD-denominated debt. According to the Bank for International Settlements and the St. Louis Federal Reserve, total debt to nonbank EM borrowers has been on a steady upward march since the global financial crisis of 2007/2008, when interest rates in the United States were slashed drastically.

The appreciation of the USD this year has made it more difficult for EM governments, banks, and nonfinancial corporations to service their debt, given that their revenues are in local currency. We expect the appreciation of the USD to continue in the short term on the basis that it’s been led in part by a depreciation of the Chinese yuan, which China has partly allowed to offset some of the impact of tariffs imposed on its exports by the United States. We expect the United States to continue to impose tariffs on Chinese goods and, therefore, the yuan should adjust moderately further, although there’s a limit, as too significant a depreciation would likely spark capital flight from China. Further depreciation of the yuan could also be mitigated if the Chinese government implements a fiscal stimulus package later this year, as rumors suggest they may.

Emerging-market countries, previously awash in foreign financing, may be left swimming naked as the tide goes out.

The Turkish crisis could also be emblematic of challenges other EM countries may face going forward because of central bank tightening. Turkey’s current account deficit is particularly large, but it’s hardly the only developing nation to run a current account deficit. Like Turkey, many EM countries have enjoyed expansions fueled by foreign debt. Developed-market investors have been happy to lend to EM countries where yields were significantly higher than on U.S. Treasuries or German bunds. As central banks all take steps—albeit gradually—to remove monetary accommodation, global financial conditions are tightening. This is likely to cause a pullback of funds into developed markets. EM countries, previously awash in foreign financing, may then be left swimming naked as the tide goes out.

The third—and wider—implication of the recent Turkish crisis is geopolitical in nature. Perhaps more startling than the collapse of the Turkish lira was the United States’ response to it. With Turkey refusing to release the American pastor, the White House announced a doubling of steel and aluminum tariffs on Turkey. It seems unlikely that Turkey will leave NATO as a result, in part due to its strategic importance, but it’s certainly driven a wedge between the United States and Turkey and has sent the latter off negotiating with other countries in search of new alliances. This has come at a time when the United States is also embroiled in skirmishes with China over trade, with the EU over trade and Iran sanctions, and with Russia over sanctions. You have to wonder if Turkey is just the latest example of a series of shifts in alliances globally that reflect the waning influence and power of the United States on the international stage.

The recent Turkish crisis has been a long time coming and is the result of a number of causes that are unique to Turkey. But don’t relax into your beach read and put your work phone away assuming there aren’t any broader implications just yet---there could be some direct contagion from the Turkish crisis, particularly to Europe. But much more pernicious is the potential warning signs Turkey may be sending about the challenges that EM will face going forward against a backdrop of a strong USD and tightening global financial conditions. The slow, dog days of August may end early for investors this year.