This summer’s annual central banking jamboree at Jackson Hole, Wyoming, was curious for its absence of focus on monetary policy.

U.S. Federal Reserve (Fed) Chair Janet Yellen emphasized the benefits of financial regulation put in place after the global financial crisis, and European Central Bank (ECB) President Mario Draghi dedicated much of his airtime to openness in trade. Given prospective developments in monetary policy—the Fed shrinking its balance sheet and the ECB tapering asset purchases—such remarks could be dismissed as diversionary tactics, but beneath the surface, the speeches on regulation and trade actually fit neatly into central banks’ plans for monetary policy moving forward. As the central bankers prepare to step back from extraordinary monetary accommodation, they hope their governments will step in and help maintain the economic recovery; however, we see real risks to this transition. If the world’s governments don’t seize the initiative, then the slow but steady and broadening global recovery could lose momentum.

Moving beyond the global crisis by reflating financial asset prices

Recall that by the time the global financial crisis came to a head in 2008, most of the world’s developed economies were confronted with a massive debt overhang. There were two main ways to address it: either write down the value of liabilities or push up the value of assets. The former tends to be politically toxic, as voters in most countries aren’t keen to see cuts in established entitlements, so policymakers across the globe opted for the latter.

Massive stimulus efforts were needed to stoke demand and reflate asset prices. There were two potential sources of stimulus that had the capacity to provide the required scale: governments and central banks. Governments in the United States and Europe found themselves constrained in trying to implement fiscal stimulus measures, given the influence of budget hawks within their ranks. With governments’ hands tied on both sides of the Atlantic, central banks—the Fed, followed by the ECB—stepped in with ultra-accommodative monetary policies, including a range of unorthodox measures never tried before. For some time, the U.S. economy seemed like the lone bright spot as recovery initially eluded other regions of the world.

However, that has changed more recently as most major economies seem to be enjoying synchronized recovery, with global GDP growth accelerating, according to our forecasts, from last year’s 2.3% to just over 2.5% more recently.1 With an economic recovery under way in most of the developed world, the Fed, the ECB, and certain other central banks are looking to step back from some of the monetary accommodation—not a globally coordinated plan, but rather a reflection of positive economic momentum each central bank has seen in its own region.

The U.S. government has announced plans to implement a number of fiscal stimulus measures that could improve growth and inflation. In Europe, both the soft and hard economic data has rebounded, and there’s been less of a focus on fiscal retrenchment. Each region’s central bank no longer feels such a strong need to shoulder the sole burden of reflating asset prices and generating demand. Seeing its window to normalize monetary policy, the Fed is beginning the gradual process of shrinking its balance sheet; meanwhile, the ECB is looking to begin tapering its asset purchases.

Elsewhere, the Bank of Japan (BoJ) shows no signs of intentionally withdrawing monetary accommodation, even as Japan’s GDP grew in the second quarter of 2017. However, there is already a stealth taper of sorts simply because the BoJ hasn’t been able to find enough Japanese government bonds (JGBs) every month to hit its purchasing targets, all while keeping the yield on the 10-year JGB anchored near zero.

We don’t expect removal of monetary stimulus to be limited to developed economies. The People’s Bank of China (PBoC) has withdrawn some accommodation, but we expect this will accelerate at the end of the year, as Chinese policymakers are concerned about the degree of leverage in the financial services industry and state-owned enterprises. 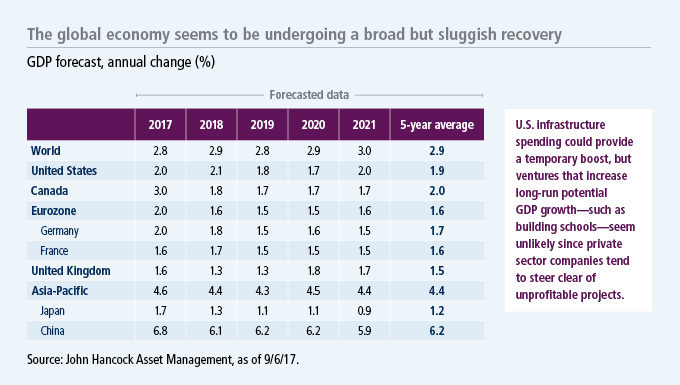 Can the world’s governments provide enough support to sustain momentum?

The Fed, ECB, BoJ, and PBoC are all likely to provide less monetary stimulus in 2018, although each has a different reason and a different method. In our view, the market’s focus on the Fed shrinking its balance sheet is a red herring. Here’s what’s worth noting: We’re likely to see the Fed shrink its balance sheet, and the ECB slow its asset purchases, and the BoJ tapering by stealth, and the PBoC pulling back on its stimulus measures, all at the same time. If there is less stimulus provided by all of these central banks simultaneously, we’re likely to see an economic slowdown unless governments can manage to step up and fill the gap.

After nearly a decade of monetary policy accommodation, central banks seem to be trying to pass the baton over to governments, a track rife with risks. Central bankers may find that, rather than completing the handoff, they could end up dropping the baton altogether.