Or at least we’ve taken a step closer to it, although the obstacles ahead are fierce. If the flurry of ministerial resignations and letters sent to prompt an ousting of Prime Minister Theresa May in the past 24 hours can be taken as an indication of how difficult it’ll be for Theresa May to push through her hard-won Brexit deal, the British prime minister isn’t paying attention to it. Instead, she pledged to forge ahead with her plan, insisting the course she’s set out on is the right one for the country.

What’s in the deal?

Here are the most important points:

"Volatility is the only certainty in the days ahead."

How does the math look in Parliament?

Now that the cabinet has supported Mrs. May’s deal, Parliament will have to vote on it. The parliamentary vote, at the moment, is on a cliff’s edge—as much as the Brexit referendum itself was.

There are a number of signs that this deal will be rejected—including the resignation of Dominic Raab (the U.K.’s Brexit minister), and open calls by prominent Brexiter MPs for a no-confidence vote on Mrs. May’s government.2 While many of us have witnessed how incredibly fractured the Conservative Party is, most have underappreciated how split the opposition Labour Party is on Brexit, too.

The deal has to win a simple majority to pass in Parliament. There are 650 MPs in the House of Commons, but due to the way it’s structured, Mrs. May needs 320 votes for the deal to pass.

Mrs. May seems likely to have 235 votes from loyalists in her party and conservative MPs who want to move the national dialogue beyond Brexit, but that leaves another 85 votes. There are some pro-EU Tories who will vote against the deal, not to mention the group of hard-line Brexiteering MPs in the party, who would prefer for the country to crash out of the EU. And finally the Northern Irish DUP will probably vote down the deal.

That said, Mrs. May might get some support from the Labour Party—there are a few Labour MPs who are in favor of Brexit, and others who feel obliged to support the deal because their constituents had voted for it. Labour Party leader Jeremy Corbyn has spoken out against the deal, likely hoping to eventually spark an election. Labour MPs will therefore have to choose whether to vote for their party (and future jobs) or their country (if the alternative is crashing out of the EU, which is generally accepted by economists to be the worst possible scenario for the U.K. economy).

If the deal passes in Parliament, then we’ll at least know what the transition period will look like, if not what shape the final relationship between the United Kingdom and the EU will take. I think the most likely scenario is that a deal will be agreed. The Irish border issue has been at the heart of the negotiations from the beginning and negotiators have tried to avoid a hard border. In the event of a no-deal Brexit, there would be a hard border the next day between Ireland and Northern Ireland—the EU would demand it. Still, this is on a knife’s edge, and there are a number of ways this could go a bit pear-shaped.

1. Theresa May is ousted

There are already rumblings of a leadership change in the U.K. government. Realistically, it probably isn’t possible to hold a leadership challenge and renegotiate the Brexit deal before Article 50 runs out on March 29, 2019, and so the country might, in this scenario, seek an extension of Article 50. This can be granted if all EU member states agree to it, but the EU suggested on Thursday that it has no interest in granting an extension. There is also a chance that a hard Brexiter who prefers the U.K. to crash out of the EU with no deal will take over the role of prime minister, in which case, no extension would be needed. Finally, Mrs. May could survive a no-confidence vote should one be triggered—she’s certainly proven her political prowess in the face of high-level resignations and political drama throughout the Brexit negotiations.

2. The deal is defeated in Parliament and a new referendum is held

If the deal is defeated in Parliament (the outcome of which is technically nonbinding), Mrs. May could put it to a referendum. But time is running out—it would be difficult to arrange a referendum before Article 50 expires next March. Furthermore, the referendum is likely to be complex: In addition to asking people whether they accept the deal or not, the referendum would probably also seek to ask what the alternative to the deal should be if it's rejected. Here, there are two options: canceling Brexit altogether or crash out of the EU. Opinion polls suggest that when given the choice to stay in the EU versus leaving without a deal, a slim majority of people would vote for the former.3 But again, we saw how that played out in the Brexit referendum. Furthermore, there would be two Brexit options versus one Bremain option on the table, and so support for Brexit would necessarily be divided. Some Brexiters may claim that is unfair.

3. A fresh election before Brexit

I think this option is the least likely, and that it would solve very little. If there’s one thing that unites the Tory Party, it’s the fear that the opposition Labour Party could sweep into power. I think this will keep the government together through Brexit.

What it means for the U.K. economy

I've long argued that any form of Brexit would hurt the U.K. economy—the country's growth prospects would be much brighter with continued EU membership. It's near impossible to provide an accurate forecast of what U.K. growth would be like post-Brexit: It depends entirely on the choreography of Brexit, most of which depends on what happens next politically. Volatility is the only certainty in the days ahead. We've already seen that in the currencies market, the way the British pound moved in tandem with the drama-filled Brexit headlines in the past 48 hours. Expect this sort of volatility to continue for the 130-odd days we have remaining until Brexit is meant to happen. In my view, a revote that takes Brexit completely off the table is the scenario most likely to boost both the GBP and the FTSE 100. 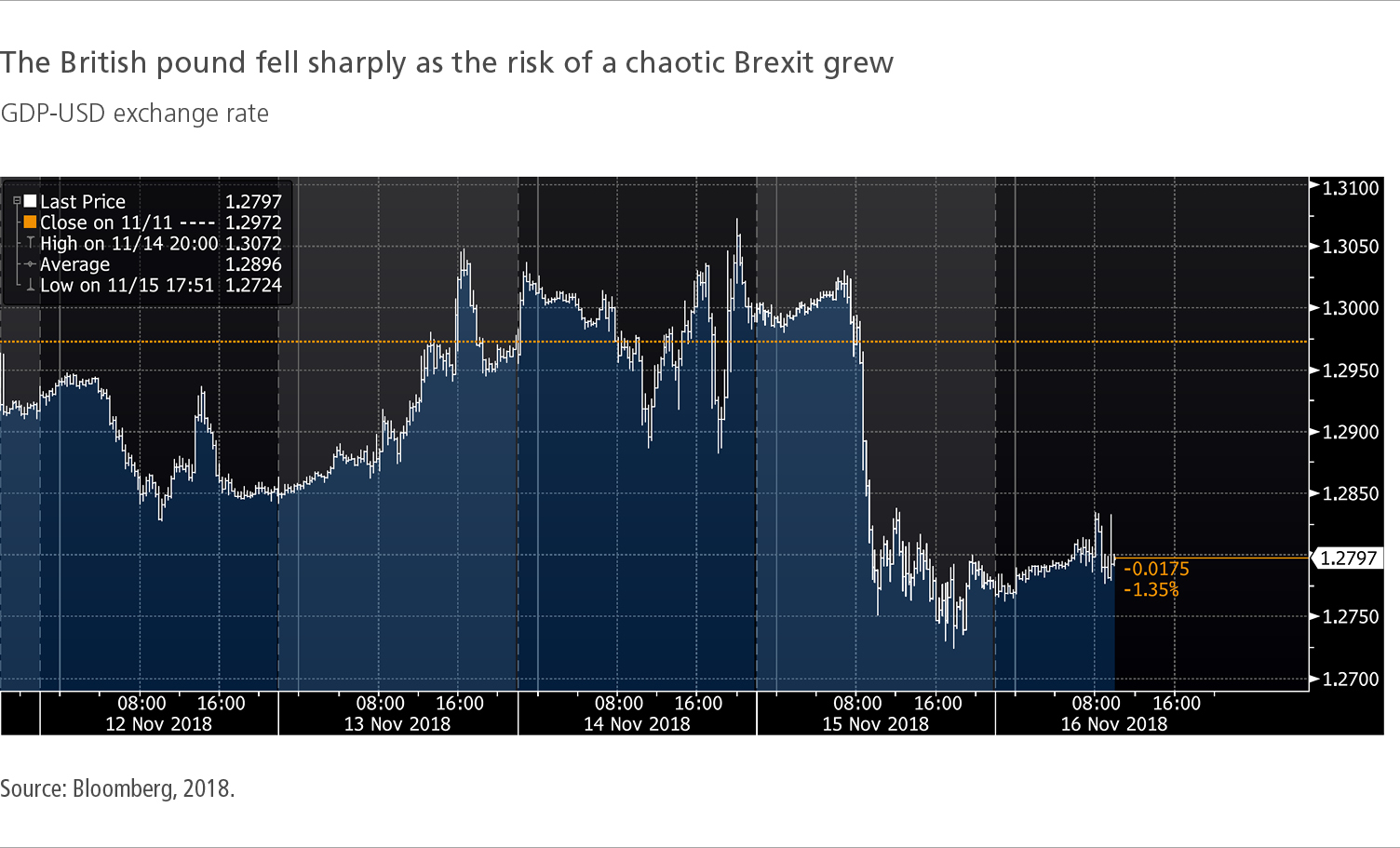 2 “No confidence vote: Full list of Tory MPs known to have written letters to the 1922 Committee over Theresa May’s Brexit deal,” iNews, November 15, 2018.