Outside of Canada, the typical investor response to news about the country's economy or capital markets can be summed up, politely, in two words: Who cares? However, we believe market participants around the world would be wise to pay more attention to the U.S.'s northern neighbor right now, not so much for its 3% share of global equity market capitalization as for its stellar economic acceleration in the first quarter of 2016.

Gleaning insight into other regions

If Canada is a window into emerging economies, which are more opaque than their more mature counterparts, then the developing world is in better shape than the consensus would have us believe: At two-decade lows on the valuation front, emerging-market equities look better all the time. Our forecast returns for the asset class, at over 8% annually for the next half decade, easily top the middling 5% to 6% forecast returns for developed-market equities over the same time period.

Turning back to North America, we have to acknowledge that the U.S. consumer has done something most uncharacteristic. Unlike during prior oil price declines, Americans have collectively decided to save—rather than spend—money. U.S. savings rates have climbed throughout the last couple of years. There are two thoughts on the saving and spending statistics that deserve consideration. Consumer savings serve as an insulator for the economy, which pushes out much of the material risk of recession beyond our five-year forecast horizon-good news for investors of risk assets. Moreover, spending is tricky to measure when prices are falling, in that we might be consuming 20% more gasoline, for example, but as we pay 50% less in price, the GDP accounts say the value of economic activity is shrinking. Our view is that economic activity is stronger than the topline GDP measures indicate because of the lower price phenomena. The cautionary tale is that oil prices are at risk of climbing once again, just as they did during the second quarter. 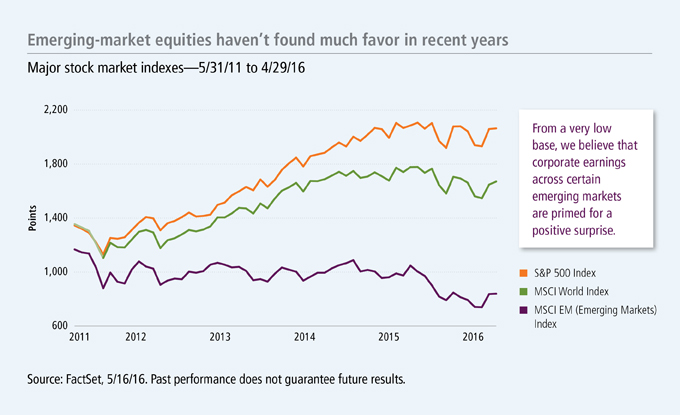 Prospects for U.S. equities depend on the time horizon

Compared with their international counterparts, we believe equity markets in the United States may stand to benefit in the short term, given the relative stability and strength of the U.S. economy. The post-Brexit probability of a global recession has increased,but U.S. economic resiliency may buffer the downside as long as liquidity from central banks remains abundant. U.S. stock valuations are high and are likely to remain so as long as investors favor assets with some measure of insulation against Europe's uncertainties. Still, we expect long-run returns on U.S.equities will be below their historical averages, a view Brexit has not altered.

When viewed through the lens of our five-year forecast horizon, we recognize the attractive valuations embedded in European equities. However, we also acknowledge the long-standing economic growth challenges facing the region—challenges that the Brexit referendum intensified. The vulnerability of European financials offers a case in point: The volume of commercial activity that drives their profit growth is likely to decline further in the near term. We expect to see more value across the European-domiciled banking industry only once the complexities of dealing with higher barriers across Europe's borders become clearer in the coming years. In the meantime, we expect that opportunities in European financials may be quite narrow, limited to the strongest banks capable of paying outsized dividends while withstanding various stress tests.

Our view of emerging-market equities continues to improve. Many of today's developing economies, unlike those caught in the economic crisis of the late 1990s, have rebalanced and reformed. While a continued rebound in oil and other commodity prices may temporarily benefit the asset class as a whole, capitalizing on the longer-term potential will likely require greater discretion. We are particularly enthusiastic about selective local growth opportunities that reside in certain regions, and we are cautiously optimistic about early signs of stabilization in China, which bodes well for greater Asia. Many of its economies are relatively self-sustaining, particularly in the consumer and information technology sectors.

Japanese equities deserve their due

Despite more than a dozen consecutive quarters of growing earnings and exceeding estimates, Japanese equities continue to command no respect. We are still out of consensus here, but we believe that the opportunity in Japan could last a decade or more. The country's corporate culture is reforming, with a greater emphasis on shareholder value and returns on equity. A range of industries may benefit as preparations for the Tokyo 2020 Olympic Summer Games continue. In our view, the Japanese stock market merits greater attention from investors around the world.

We expect corporate credit to demonstrate continued resiliency. While we may be in the later stages of the credit cycle, we still prefer the risk/reward profile of U.S. high-yield corporate debt to many equity markets. Meanwhile, nominal U.S. Treasury issues offer positive yields and a measure of insulation against uncertainty shocks. Inflation expectations have fallen below core inflation rates, pressuring relative returns on U.S. Treasury Inflation-Protected Securities (TIPS). If a cyclical uptick in inflation presents itself—as we expect—then that trend would likely reverse, with TIPS outperforming nominal Treasuries.

We remain positive on emerging-market debt and continue to believe it will offer above-average returns over the next five years, bolstered by steady to slightly strengthening currencies. Valuations are attractive, as many of these assets have been dismissed amid an extended commodity market downturn. In our view, most emerging economies are in far better financial condition than at any time in the last two decades; however, the long-run prospects for international developed-market debt issues are much dimmer. Given extremely low—and in some cases negative—yields, we view most European and Japanese government bonds with a good deal of caution. Although they may still benefit from fleeting flights to safety, international developed-market sovereigns may now be poised for some of their weakest returns in a generation or more.